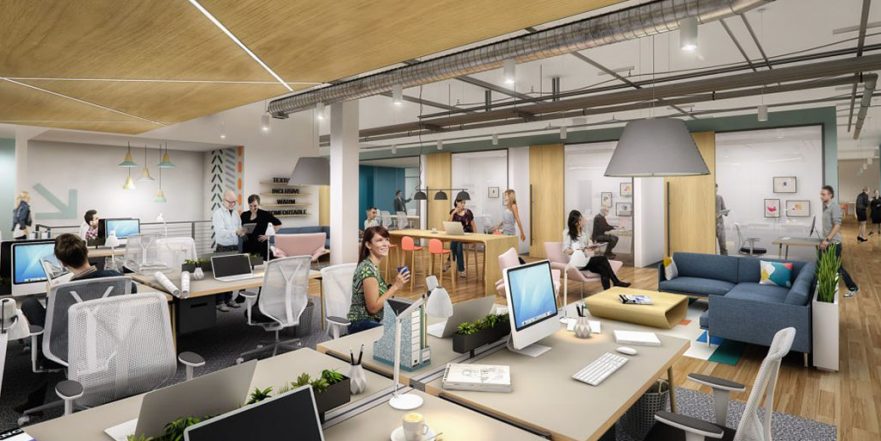 I did not know what to expect out of joining LMR’s Leadership Quest Class of 2019 beyond learning about the region and expanding my network.  I certainly could not have predicted that I would go on to co-found The Collaboratory of Virginia, www.thecollaboratory-va.org (“CVA”). At the mid-year retreat a fellow classmate, Molly Dean-Bittner with the Community Foundation, asked me if I had considered opening a co-working center for nonprofits because of my background in commercial real estate and having built an executive suites business called Acclaim Business Suites.  At that time, I had not, but I began to think about it.  The problem with co-working centers is they’re usually in high-rent buildings and they’re expensive to build out.  That’s why they have to charge more than most nonprofits can afford.  In March, Molly introduced me to Adrienne Wright, CEO of U-Turn, Inc.  Adrienne was looking to build a co-working center on the 2nd floor of their 160,000sf event and athletic facility that was once Circuit City’s distribution center.  After a few months of research and discussion, we found the “solution.”  We formed CVA as a 501(c)(3) so that we can raise the roughly $5 million required through donations so every dollar can go back into the center.  CVA will rent the second floor from U-Turn at well-below-market rates.  Those factors allow us to construct a 38,000sf first-class, modern co-working center exclusively for nonprofits, charge our resident members less than equivalent Class C office rent, and still be self-sufficient going forward. More importantly, CVA is not just about inexpensive office space, it’s to stimulate collaboration and innovation between and among its nonprofit members.

There are other LMR connections to CVA as well.  It was at the Spring 2019 LMR Board Connector that I spoke with 20 or so nonprofits to learn about them and potentially join their board.  However, as I began to speak to the nonprofits, we inevitably talked about CVA and the response was universally positive.  They all wanted CVA to happen, whether or not they could relocate themselves.  That was the validation I needed to fully commit to the project.

At the LMR Fall Reception another classmate, Mollie Brooks with Genworth, expressed an interest in helping with CVA.  Aside from being in the foundation world through the Genworth Foundation, Mollie has a Masters in Nonprofit Studies from the University of Richmond and did her thesis on collective impact and cross-sector collaboration.  She was the perfect third member of the team.  Beyond the class of 2019, we have sought advice from LMR President & CEO Myra Goodman Smith as well as the LMR staff and are tapping into the alumni network to seek advice and obtain support.  The collective knowledge and lessons learned among LMR alumni are invaluable to us.